Coldwell Banker Around the World: May 2021

Situated between the mountains and the Mediterranean, Barcelona is a vibrant city with something to offer everyone.

An Around the World team favorite, let us head to Barcelona, Spain! “There is no better place to live in Europe. Coast, mountains, excellent climate, and great food,” Artur Stabinski, Director of Coldwell Banker Anteris Real Estate says. Situated between the mountains and the Mediterranean, Barcelona is a vibrant city with something to offer everyone. Barcelona is enchanting— cobblestone roads, art galleries and museums abound as well as delectable eateries. Yet, Barcelona boasts some of the world’s most unique architectural structures; the city has been recognized by the Royal Institute of British Architects. “Barcelona is a perfect combination of Spanish relaxed culture and northern European seriousness,” Stabinski said.

Tourists and locals alike will spend their days exploring the wonders of Park Güell, indulging in tapas and sangria al fresco, enjoying live music in the Gothic Quarter, and admiring the abundant art scene. Engage in a friendly debate about the greats… who do you prefer: Picasso or Dali? Or simply gape at Gaudí’s masterpiece, La Sagrada Familia. The rich history, cuisines, culture, and activities make this city a must! Artur Stabinski is the “go-to-guy” for anything related to cocktails and live music, so book your visit now and be sure to give Artur a call when you do. Hasta luego! 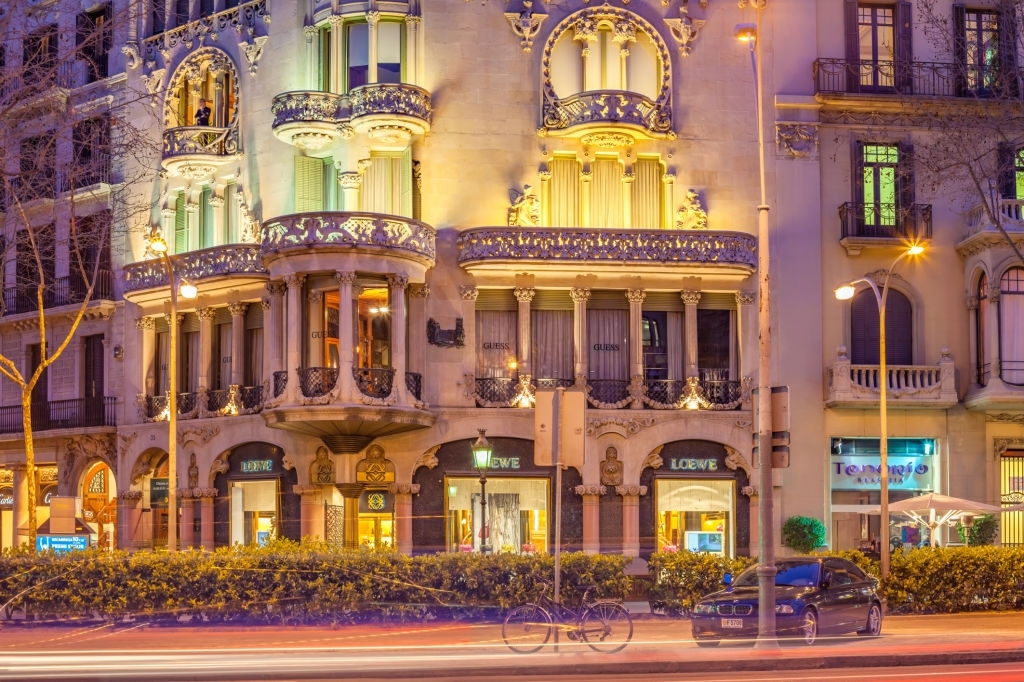 Casa Lleo Morera on Passeig de Gracia avenue in downtown Barcelona Spain in the evening. It is one of the three important buildings of Barcelona’s Illa de la Discordia, house designed by noted modernisme architect Lluis Domenech i Montaner.

Where do you live:  Barcelona, Spain

What is the perfect weekend day like: We can start off the weekend in Park Güell or Montjuic, walk along the beach, or go to the outskirts. Come Sunday, we’ll enjoy a brunch by the beach then return to the city for a show and dinner.

What are the common modes of transportation there: Barcelona is a metropolitan area that is very well connected by metros and suburban trains. As for private transportation, the absolute leader is scooters (we have over half a million of them in the Metropolitan Area of Barcelona)! In the past years, we have also developed a very effective transport system, while incorporating more sustainable options such as shared bicycles and e-scooters.

Tell us about the foods your area is known for: Spain and Barcelona are a foodie’s dream destination, as we have so many different cuisines you can try. The list is long, but the city is well-known for its Mediterranean cuisine you can find for a good price and wide range. There are also tapas, which are little portioned foods that come in various forms and are found throughout Spain. And if you are looking for Michelin star experiences, you will find that Barcelona offers over 20 Michelin star restaurants.

What is your favorite meal? At home or at a restaurant: No matter whether I have a fish or meat Paella, we have excellent seafood options provided by local fish harbours such as the ones in Palamós, which offer the popular Gambas de Palamós or Vilanova harbour. Our red tuna, Balfegó from Tarragona is also well-known, even in Japan.

Where do you recommend someone vacation in your region, why: Barcelona itself offers many things that you will enjoy. It is very well-known for its delicious cuisine, beautiful architecture and leisure activities. If you like beaches, I recommend the Costa Brava or Tarragona, although be aware that it gets crowded during summer. Both locations offer great lodging, gastronomy, and activities. We are also fortunate to have the Balearic Islands only 30 minutes away by plane and snow ski areas of Pyrenees within 2 hours’ drive.

What is your favorite recreational or leisure time activity: Discovering hidden corners totally unknown to tourists and little known by locals. In Barcelona, you must visit museums. There is a wide variety of museums you can visit, and if it’s the first Sunday of the month the entrance is free. I’m your “go-to guy” when it comes to cocktails and live music in the Gothic Quarter with friends. Catalunya is also known to have a lot of old medieval towns with old castles which is a must for our visitors.

Is there a specialty your area is known for: Cultural activities and leisure services are well known in the region, along with cuisine and architecture.

Share a little known but interesting fact about the area/region: Barcelona is the only city that has received the Royal Gold Medal for architecture, given by the Royal Institute of British Architects, due to its unique variety of imaginary or fanciful buildings. This annual award is normally given to an individual or group. Barcelona received this medal in 1999.

If you were to live in any other region where we have a Coldwell Banker presence, where would it be and why: Loving the Mediterranean weather and enjoying both sea and mountain, I would choose to live by the French Riviera. And if I were to choose somewhere in the United States, I would go for L.A.

Barcelona is the second biggest city of Spain, and it’s a capital of the wealthiest Spanish Region: Catalonia. Barcelona is over two thousand years old and has a place in Roman history. If we go back in time, Barcino was the name given to Barcelona during the Roman era. Colonia Iulia Augusta Faventia Paterna Barcino was the full name of Barcelona, and its inhabitants were called Barcinonensis and Faventinos. Over the years it has grown into a metropolitan city and became Catalunya’s capital.

This city harbor (Catalan: Port de Barcelona) has a 2000-year-old history and is the most important port in the Mediterranean. The Mediterranean coast of Catalunya also offers a variety of coasts such as Costa Brava which is in the northern part and Costa del Garraf and Costa Daurada which are located in the south.

This website is operated by a brokerage or salesperson who is a member of The Canadian Real Estate Association.

The listing content on this website is protected by copyright and other laws, and is intended solely for the private, non-commercial use by individuals. Any other reproduction, distribution or use of the content, in whole or in part, is specifically forbidden. The prohibited uses include commercial use, "screen scraping", "database scraping", and any other activity intended to collect, store, reorganize or manipulate data on the pages produced by or displayed on this website.